You are here: Home / breakfast / Bacon in the Oven
Jump to Recipe
2.4Kshares

Making bacon in the oven is the only way to have perfectly crispy and delicious bacon without any hassle. Baking bacon for the win!

Discovering how to make bacon in the oven has been one of my all time favorite cooking hacks.  As someone who looooves bacon but is not a fan of the clinging cloying smell from frying it, this has been a lifesaver!

Cooking bacon in the oven while making Greek yogurt pancakes on the griddle, and poached eggs on the stove top (with hollandaise sauce in the blender!) is one of our favorite ways to cook breakfast for dinner. Or breakfast for breakfast! 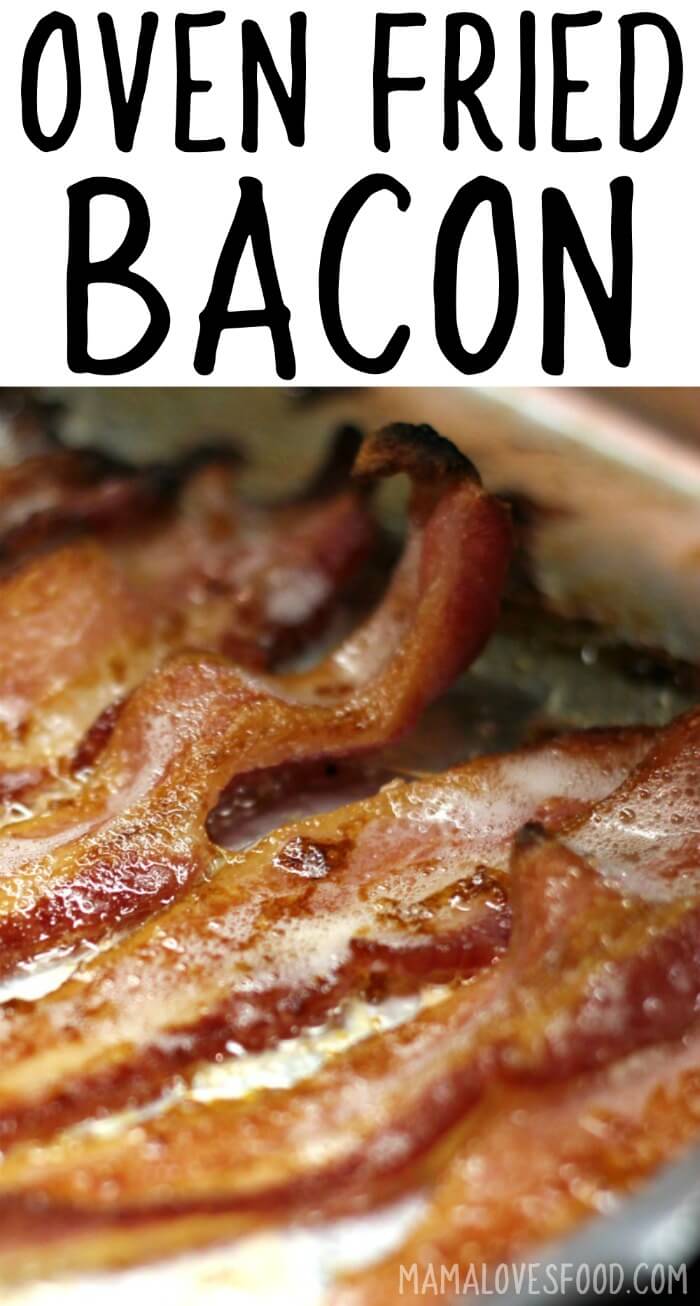 Bacon in the Oven

How long do you cook bacon in the oven?

Baking bacon at 375 degrees takes roughly 30 minutes.  If you’re using a thin cut bacon and like it on the chewy side, the time will be a little bit less.  Alternatively, If your oven baked bacon is super thick and crispy (mmmmm) then it may take upwards of 40 minutes.

The beautiful thing about making bacon in the oven though is you don’t have to touch it or flip it at all.  Just peak into the oven every now and again to see if it’s cooked to your liking. 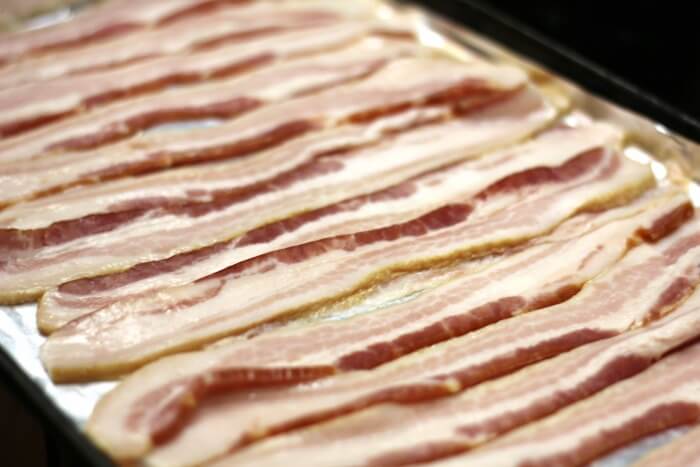 Can you cook bacon on parchment paper in the oven?

You can cook bacon on parchment paper in the oven, or on foil in the oven, but honestly unless you’re using a non-stick pan (which I don’t personally recommend), then it’s fine to do it directly on the baking sheet.  The bacon doesn’t tend to stick, especially if you crinkle it (see how we do it in the video below).

I avoid cooking bacon on non-stick pans because I always have trouble with the coating coming off.  We use an aluminum bakers half sheet for this and most of our roasting.

Rendered fat from cooking bacon in the oven

One of my favorite things about making bacon this way is that when you bake bacon it renders the fat into the pan.  After the bacon is done cooking in the oven, strain the fat into a jar and use it too cook with again later.  We love to use it for roasted brussel sprouts, caramelized onions, maple bacon salad dressing, and it works great for seasoning your cast iron pans. 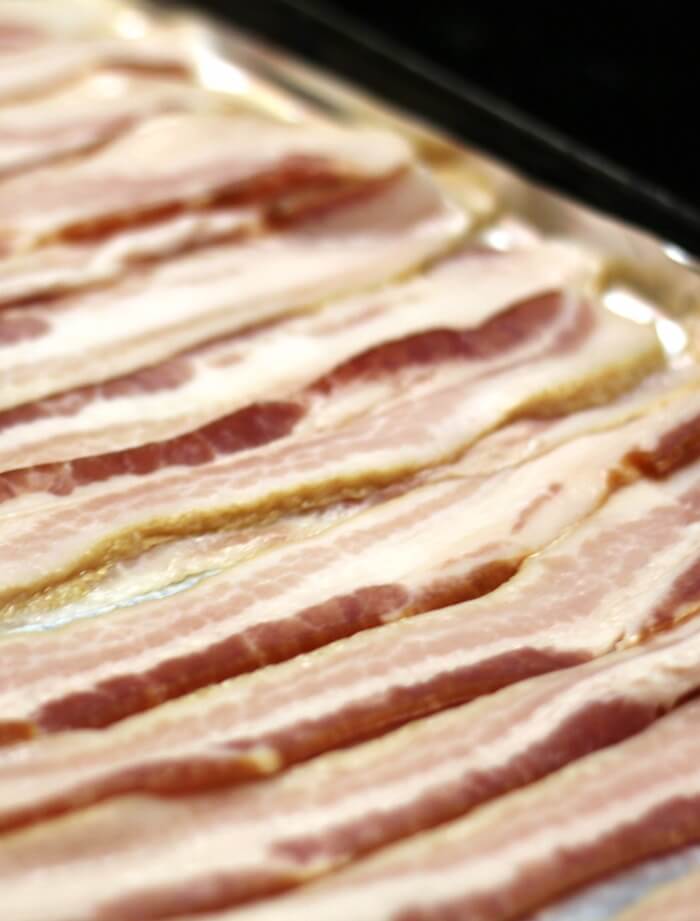 How do you know if bacon is bad?

Bacon will go bad after about a week in the refrigerator once it’s opened.  You will know if bacon is bad because it will smell off and may have turned somewhat brownish, grayish or even greenish.

Cooking bacon that has gone bad will not make it safe to eat.  If you believe your bacon has spoiled, throw it away. 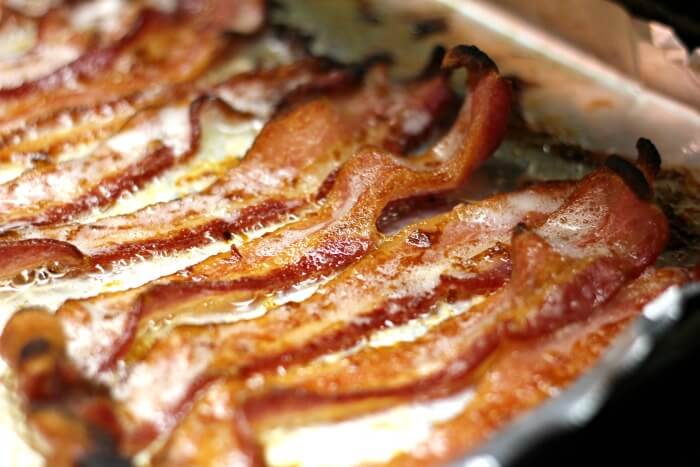 Tools for making bacon in the oven 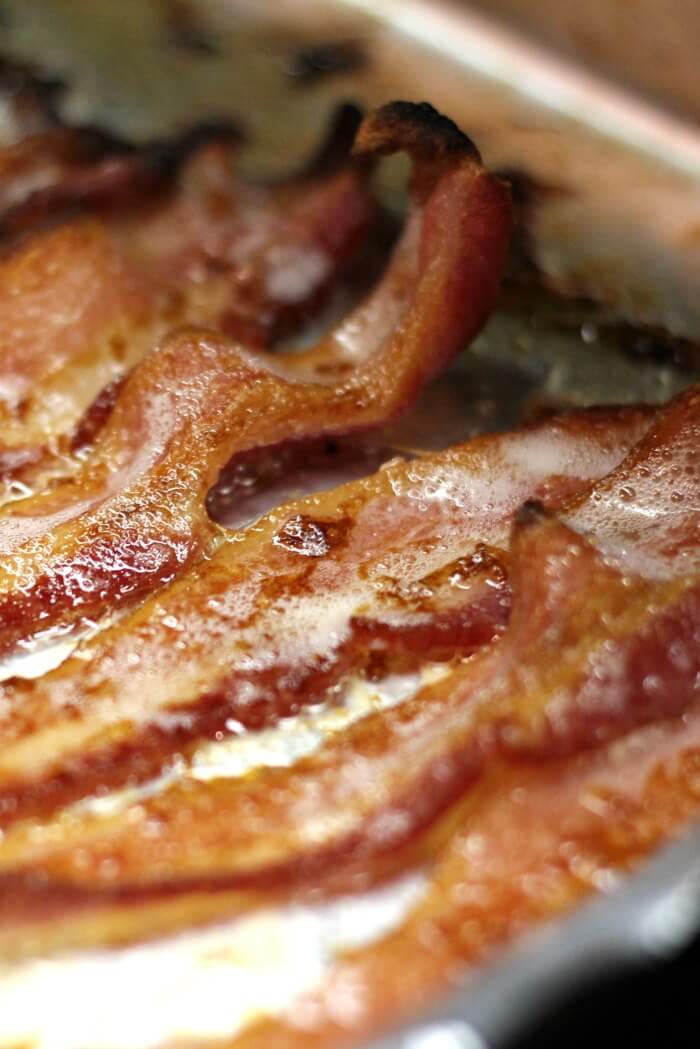 Don’t forget to SUBSCRIBE to the MAMA LOVES FOOD NEWSLETTER for FREE recipe notifications delivered to your email!
❤
Or SAY HELLO TO US on messenger and get notifications right to your phone!
❤
If you make one of our recipes, please use the hashtag #mamalovesfood on INSTAGRAM for the chance to be featured in our stories!!!
❤
FOLLOW MAMA LOVES FOOD ON ★ FACEBOOK ★ INSTAGRAM ★ PINTEREST ★ TWITTER ★ YOUTUBE ★ so you never miss an update – and JOIN OUR AWESOME FACEBOOK COMMUNITY!

How to Make Bacon in the Oven

You can also watch us make this oven baked bacon on YouTube along with hashbrown waffles. Make sure to tune in for all our live cooking shows! 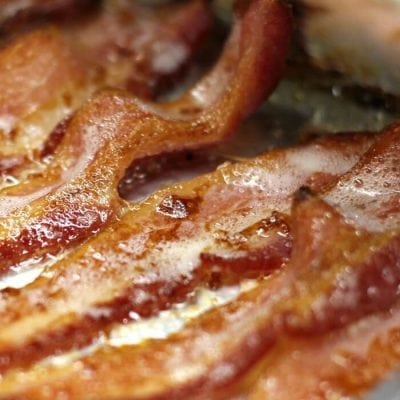 Bacon in the Oven 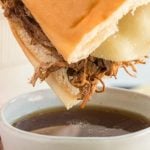 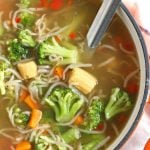 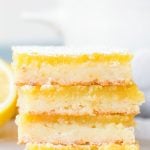 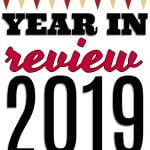