Yay for Crock Pot Ham! Moist, tender, and bursting with flavor! This slow cooker spiral ham dish is my most requested recipe when friends visit for the holidays!

Crock pot ham is a major winner in our home. I don’t typically go nuts for ham, but I will eat this ham until I burst! Make sure you cook enough for leftovers because this makes the most amazing ham sandwiches ever. Serve it with sweet potato casserole, a pile of roasted red potatoes, & crispy broccoli. 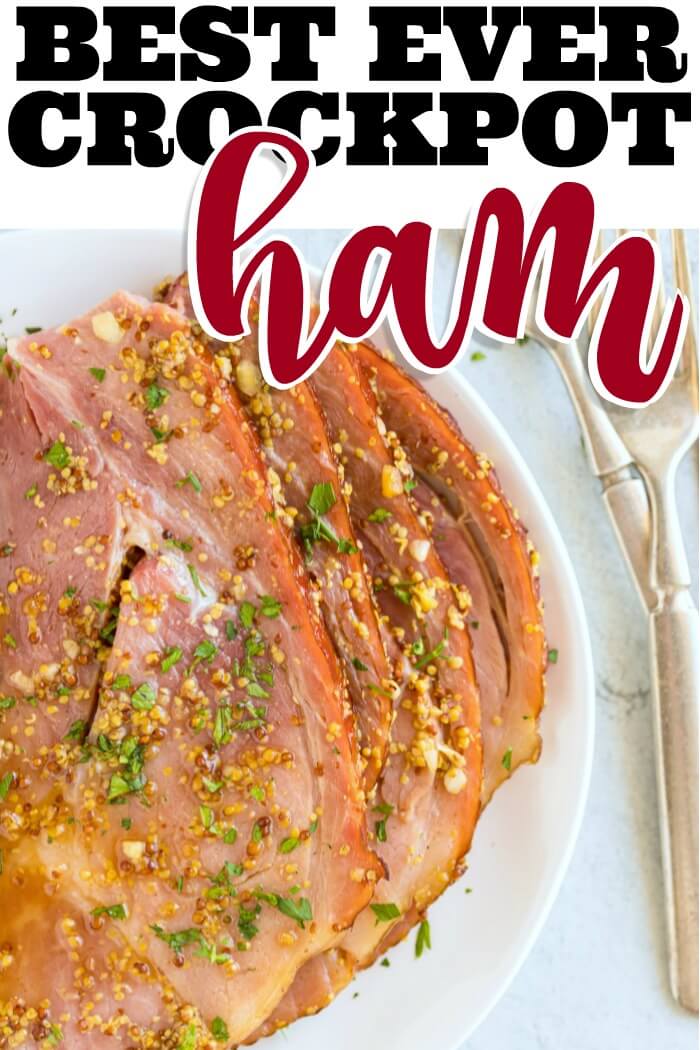 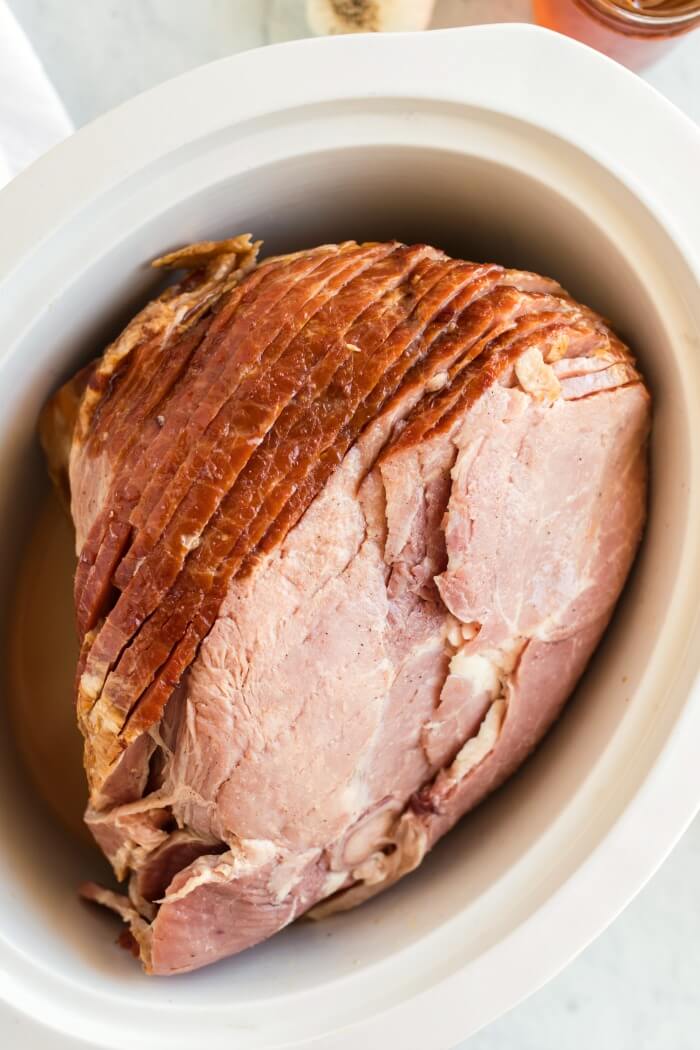 How Do You Make Ham in a Crock Pot

⭐ First, whisk together all ingredients except ham – or if you prefer a smooth glaze, pulse in the blender to desired consistency.

⭐ Next, place ham in crock pot, and slowly pour glaze over ham, making sure to get some between each spiral slice. Lift ham to get glaze underneath as well.

⭐ Then, cook on low until heated through. 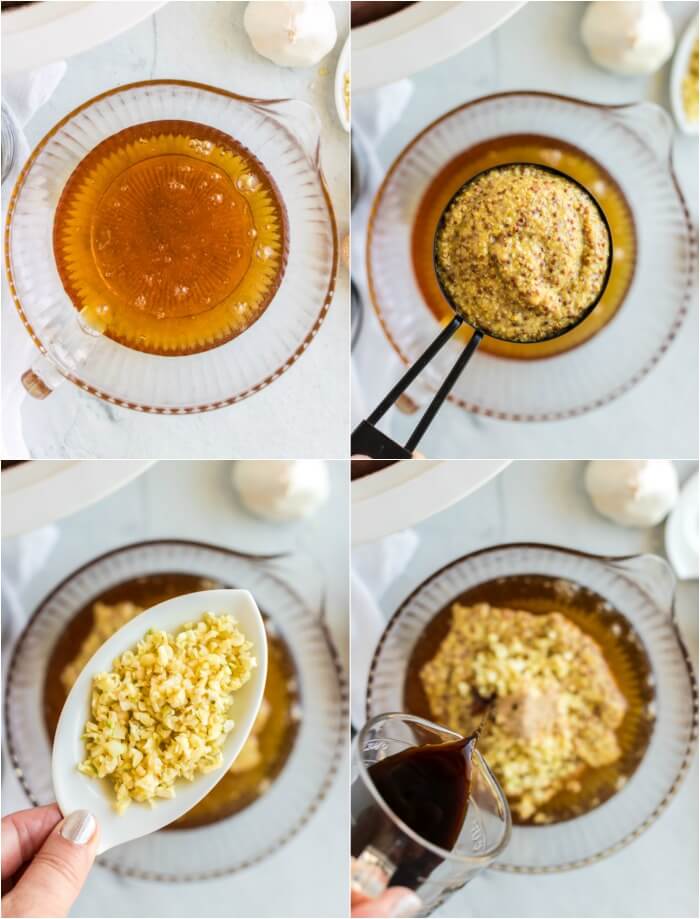 How Do You Cook a Spiral Ham Without Drying It Out?

The key to keeping a spiral ham moist when you cook it is to make sure there is plenty of liquid in the cooking vessel and to keep it sealed. You want only want to reheat the ham, as a spiral ham is already cooked through, and doing so with steam is the best way to keep it moist and delicious.

In this crock pot ham recipe, the honey garlic glaze in the lidded slow cooker creates the perfect environment for a spectacularly moist and delicious result.

Can I Put Frozen Ham in the Crock Pot?

The danger zone is the temperature at which meat and other food is at risk of growing dangerous and harmful bacteria.  Food should never be in the danger zone in excess of two hours.

Leftover ham is best reheated in the microwave to avoid drying it out.  Spoon drippings over top, then microwave in 30 second increments until warmed through.

Seasoned salt is added to the sauce mixture.

How Do You Warm Up a Precooked Ham?

Most spiral cut hams are precooked, so when you prepare one you are actually only warming it up.  We love using the crock pot slow cooker to warm up precooked ham as it is the perfect way to keep the ham from drying out while also adding tons of flavor.

Precooked hams can also be warmed up in the oven or microwave.  The best way to do this is with steam as opposed to dry heat.

How Do I Cook a Frozen Ham?

The best way to cook a frozen ham is by thawing it first.  If you need to thaw a frozen ham quickly, submerge it in cool water and drain/refill the water about every 15 minutes until the ham is fully thawed. 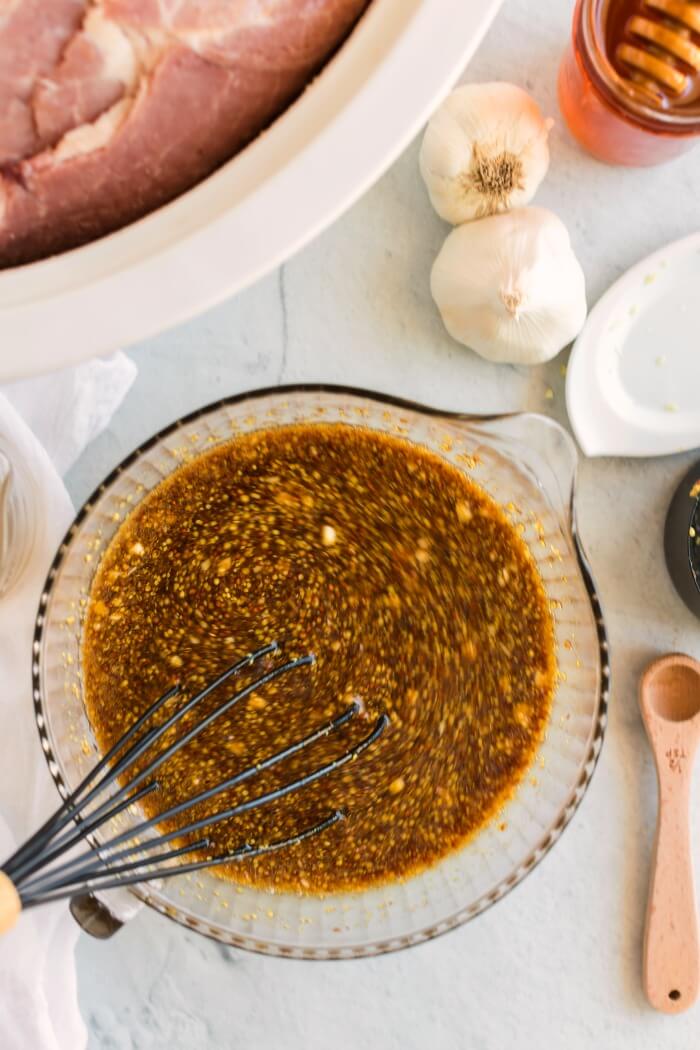 Whisk everything together, or if you want a smooth sauce, use your blender.

Can You Eat a Ham That Has Been Frozen For Two Years?

You can eat a ham that has been frozen for two years if it has been frozen at a constant 0 degrees Fahrenheit. It is important to note, however, that the quality of the meat will begin to deteriorate after a few months of being frozen.

How Long To Cook a Ham?

Since we’re only heating up a precooked ham when preparing spiral cut ham recipes, it’s important not to overcook and dry out the meat.

Our crockpot ham is generally done between two and four hours, this will depend on the size and shape of your ham. 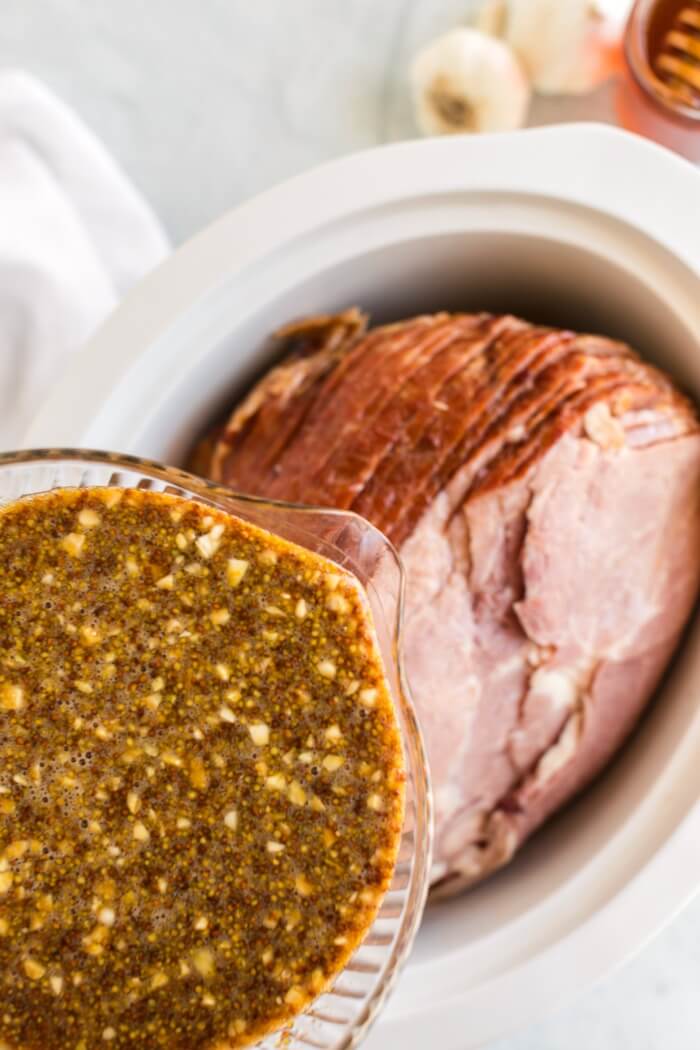 How Much Ham Per Person?

We like to do a 9 or 10 pound ham for our family of 7 so we have plenty of leftover ham for make ahead breakfast sandwiches and breakfast casserole! 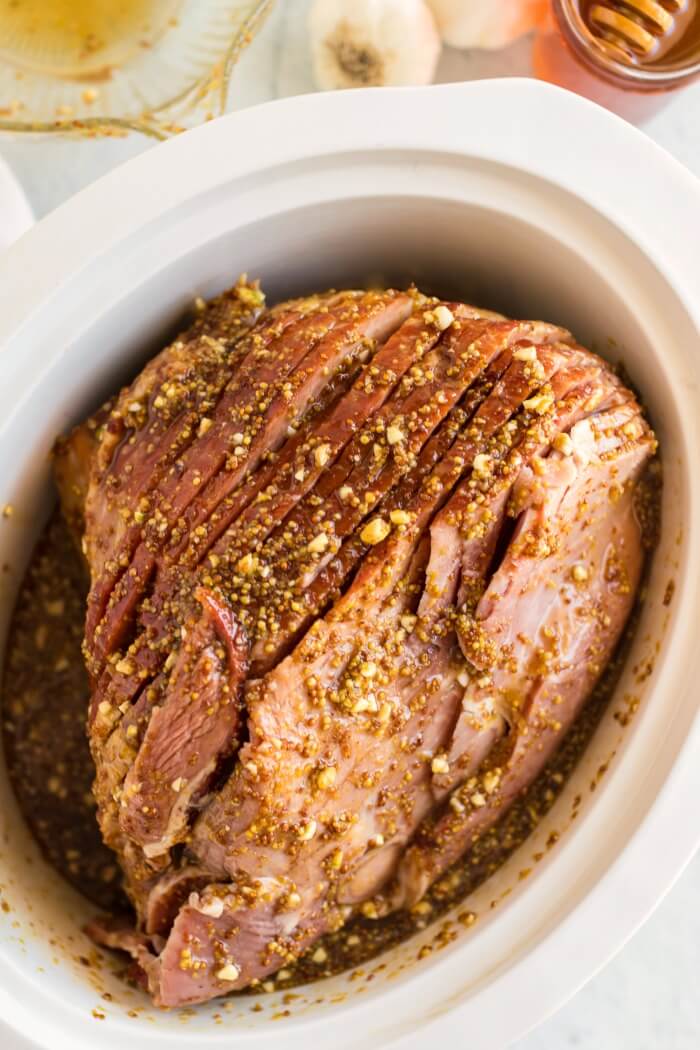 Make sure to get sauce in-between ham slices too!

What to Serve with Crock Pot Ham

Crockpot ham is a holiday staple in our home, so we will typically serve it with holiday sides like easy mashed potatoes, roasted green beans, and creamy pumpkin soup.

Don’t forget a batch of quick dinner rolls (or our famous pumpkin biscuits!), with whipped butter, and of course it’s not a holiday without cranberry sauce and a slice of pecan pie, apple bundt cake, or caramel cheesecake!

What to Do with Leftover Ham 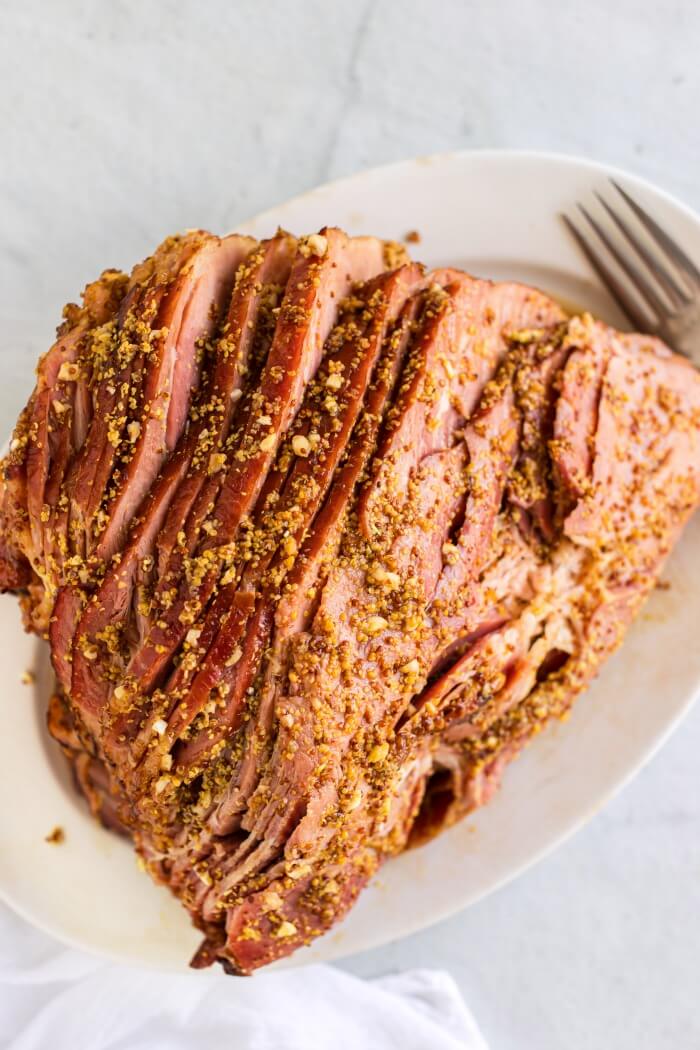 Pour drippings over the ham for maximum flavor! 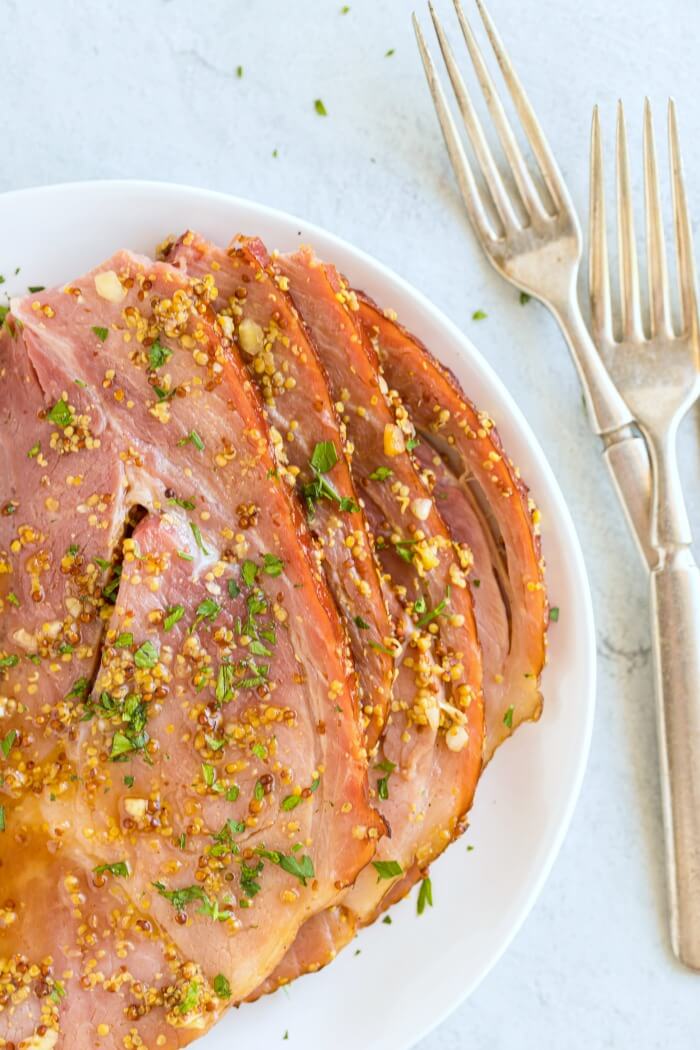 Garnish with parsley if desired. 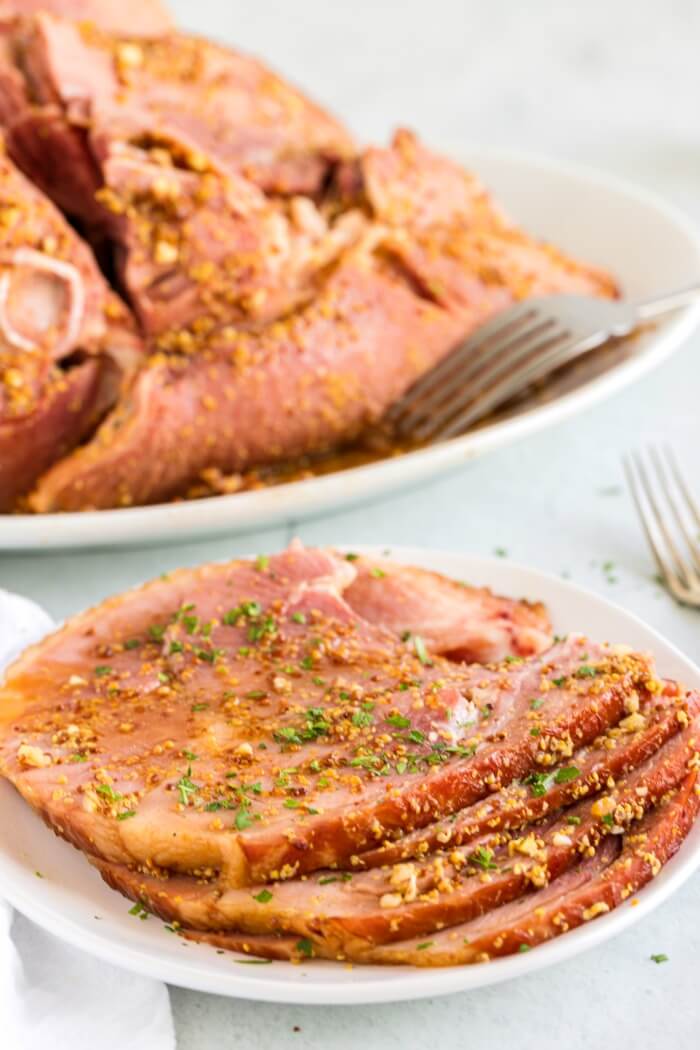 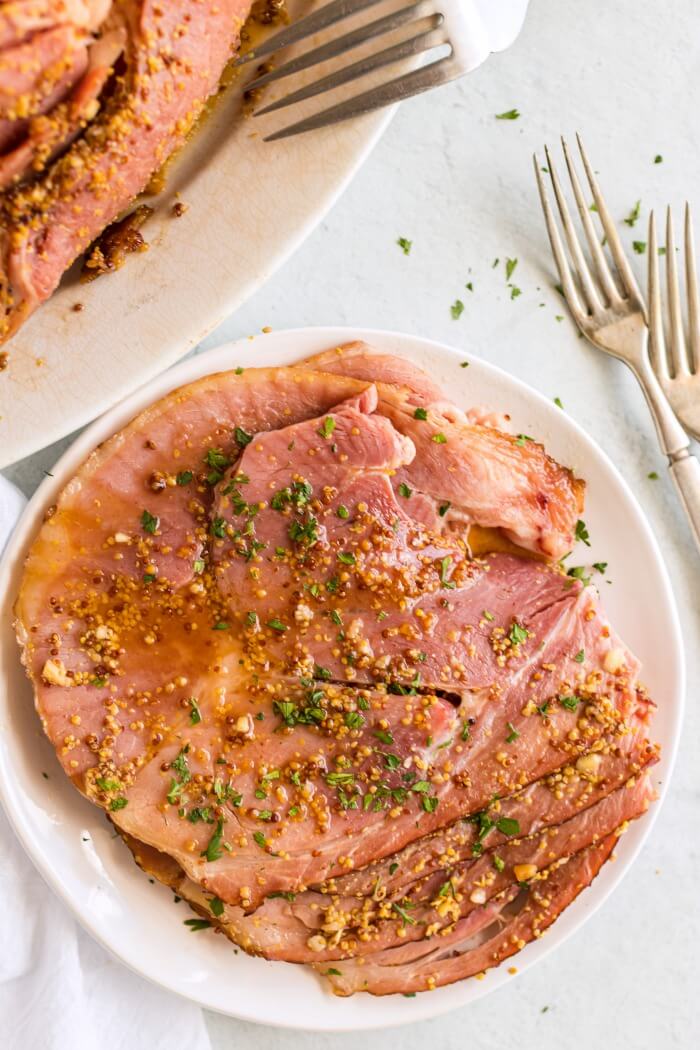 How to Make Crock Pot Ham 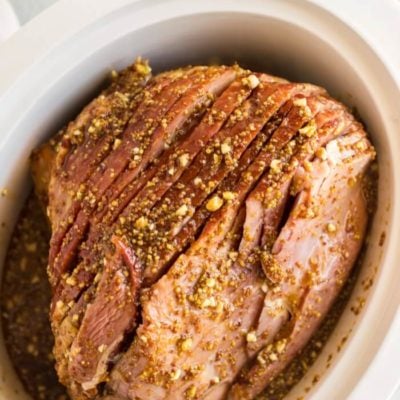 Yay for Crock Pot Ham! This slow cooker spiral ham dish is my most requested recipe when friends visit for the holidays!

Cook time will depend on the size and shape of your ham, as well as the temperature at which your slow cooker runs - I find ours is typically perfect around the three hour mark.  Calories are automatically generated. For best results calculate based on your exact ingredients.
If you love cookbooks, CLICK HERE to check out our shop!

Finish your holiday dinner with the perfect pumpkin cheesecake dessert!

How long does it take to heat a ham in a crock pot.

It takes between 2 - 4 hours to heat a spiral ham in a crock pot. Spiral hams are pre-cooked so be careful not to heat for too long or the ham will dry out.

How do you keep a spiral ham moist?

The best way to keep a spiral ham moist when heating it is to use a sauce or glaze and cook it covered.

Can you heat a precooked ham in a crock pot? 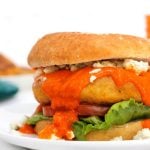 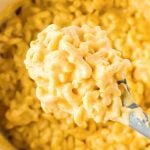 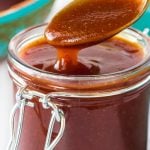 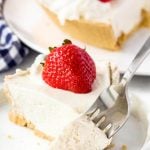